Yes, it’s free: Fridges installed around Worcester offer food to any in need 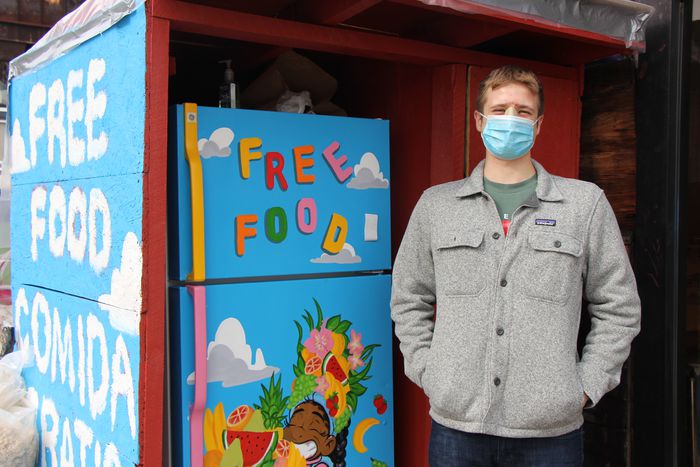 Behind the vibrant blue door of this refrigerator was a bounty of goods: apple sauce, cottage cheese, yogurt, mixed greens, milk and eggs.

More than just a vessel to keep food fresh, this fridge is a resource set up to help combat food insecurity, an issue that has only been exacerbated by the financial impact of COVID-19.

It’s also a way to connect people around support for one another and build resilient communities, said Billy Gove, a volunteer who worked with others to organize the Worcester Free Fridge.

“Knowing that if you’re facing insecurity that the community has your back. People are willing to go the extra mile to drop off donations,” Gove said.

The fridge was set up at 300 Southbridge St., the home of Save The Bridge, on Feb. 14 after months of work from volunteers to organize the fridge. Gove has worked with Lucy Barret, an organizer; Khai Lai, a senior business analyst from Shrewsbury; Vanessa Calixto of El Salon; Addison Turner of the Worcester Youth Co-ops; Frankie DeFranco of The Bridge; volunteers Ioannis Alexiou and David Flores; and others.

Soon, Worcester Community Fridges is getting ready to open its second fridge at 44 Portland St. downtown. The first fridge is in a high foot traffic area and can be emptied at least three times a day, said Maria Ravelli, a community organizer.

On Saturday afternoon, for example, the fridge emptied out in about an hour, Ravelli. Another volunteer headed out to grocery shop to fill it back up. In addition to volunteers, the group works with organizations like Project New Hope and Angels Answer.

The effort by Worcester Community Fridges started in January and moved fast with online crowdfunding. The fridge opened at the end of January.

“The work that we’re doing is because we’re acknowledging that, as a people, we’re all being underserved and we’re just figuring out a way that we can equitably redistribute those resources,” Ravelli said. “I think we’re also normalizing free food exchange in general. Letting people know that we all take from the fridge. This is a community resource.”

Ravelli said volunteers are starting to get to know some of the people who use the fridge.

“We have one neighbor who’s obsessed with broccoli so every time we see him we make sure to always have something broccoli-related in the fridge for him,” Ravelli said. “I think it just makes people feel seen, which is really powerful.”

In Worcester County, 1 in 12 people don’t have enough healthy food to eat, according to a 2019 impact report from the Worcester County Food Bank. Of children, that static narrows to 1 in 9.

So far, the fridge on Southbridge Street has been stocked but the donations go quickly, Gove said. The fridge was painted by an artist known as Planet Janet.

“Right now we’re trying to keep track of how to know when donations are being taken, when the fridge is empty. We’re trying to see what’s really in need so we’re all brainstorming ideas of how to better serve the community,” Gove said.

The reaction has been heartwarming, Gove said, as people come together to fill the fridge.

Gove said he thinks of mutual aid as a change of frameworks. Instead of having an outside entity come into the community to help, a project like the free fridge effort is about changing frameworks so the community can uplift itself, he said.

Word of mouth and social media have been effective tools for both groups to spread awareness of their fridge programs.

“When seeing that this kind of mutual aid initiative exists, it was just like an instinct to be like ‘duh, of course that makes sense to do that,” Ravelli said.

The original article can be viewed here

The Worcester fridges are ready to accept homemade

Time to go through those junk drawers! We will be

Don’t have cleaning supplies? Dm us! We can get

Looking for an easy way to get involved? Check-in

Join us at @thevillageworcester next Saturday from

Ready for the experience of a lifetime? 🧚‍♂