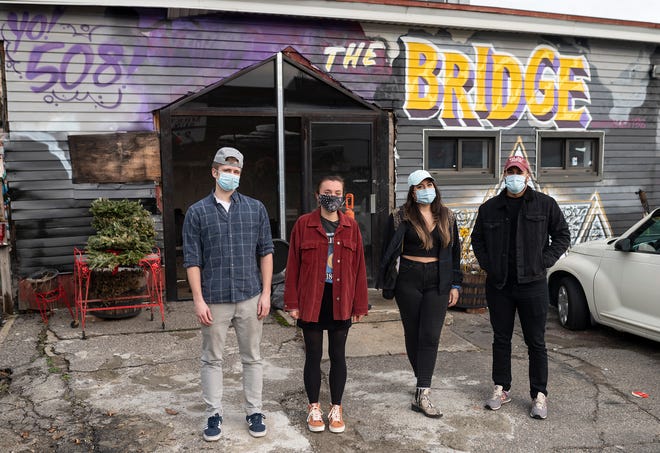 WORCESTER — Two community fridge organizations are hoping to keep the refrigerator light on for those who are financially strapped and hungry and looking for guilt-free, free meals.

A school teacher at the Fitzgerald Institute in Northboro, Maria Ravelli, spearheaded Worcester Community Fridges, or Woo Fridge, which she describes as a “free food fridge” network where community members can take what they need and give what they can.

“A community fridge is, basically, a form of mutual aid,” Ravelli said. “So, it’s not charity. It’s not a handout for the less fortunate. It’s just a way for community members to have a sustainable place to put their food that would otherwise be wasted and then it just allows other members of the community to access free food.”

Last fall, Barrett completed a study on systems of mutual aid in Worcester and found the systems of aid that were most effective in assisting people with housing and food issues were informal systems of aids, such as the community fridge concept.

“At the start of the pandemic last spring, there started to be a wave of community fridges across the country,” Barrett said. “They started in California. In my hometown of Albany, New York, they started a really good program and I was inspired to start one here (in Worcester).”

Worcester Community Fridges will have an opening ceremony for its first fridge at noon Jan. 31 in front of Fantastic Pizza & Café, 910 Main St.

Hoping to have fridges in five locations throughout Worcester by the end of 2021, Ravelli said Worcester Community Fridges is not necessarily limited to people who don’t have enough money to securely access food. It’s for anybody and everybody who is passing by and just want to give or take something, she said.

“It’s just a place to provide the community with food, essentially,” Ravelli said. “There is just so much going on right now where people are starving on our streets and there’s not strong leadership that’s really doing anything about that crisis. So, we’re hoping to help out.”

Worcester Free Fridge plans to place its inaugural free fridge near “The Bridge”  on Southbridge Street, right next to the Miss Worcester Diner. They hope to have their first fridge operational by Feb. 14, and hope it helps as many neighborhoods as there are hills in Worcester.

“There are a lot of different free food programs in place in the city that are really awesome and doing really amazing work, but there are some barriers in place that might prevent individuals from accessing that food,” Barrett said. “At Worcester Free Fridge, our thing is that food access is not just about being able to access food, but it’s about being able to access fresh, healthy food of an individual’s choosing in a dignified manner.”

Although she has been organizing Worcester Community Fridges since the beginning, Ravelli said she’s not leading the effort, which she calls a full-on community effort for the people, by the people and fully run by the people.

“Food is a human right. So, the fact that in this country we put a price tag on things that people need to live — it’s disgusting,” Ravelli said. “The fact that 52 billion-plus pounds of food go to landfills annually while there are people who are actively starving, that’s an act of violence. I’m willing to take that fight.”

Although Ravelli and Barrett are working independently of each other, these respective fridges are similar.

In both cases, the fridges will be stacked with “fresh nutritious food,” and “rescued produce,” produce that would otherwise have ended up in a landfill. The focus is on fresh fruits and vegetables and stock is replenished every day. Neither fridge is accepting donations of meat.

The fridges will be thoroughly cleaned regularly by volunteers.

The fridges are open to the public 24 hours a day, seven days a week, and anyone can come and take food out, no questions asked.

As for opening during the COVID-19 pandemic, both Ravelli and Barrett said they are taking all the necessary safety precautions.

“I don’t want to have this, if it’s not safe for people,” Barrett said. “We’re going to have a few mechanisms in place. We’re going to be offering masks and hand sanitizer at the fridge. We are putting together community guidelines to keep on the side of the fridge and so those will ask folks to wipe down the fridge after every time they use it. Also, we’re requesting that there is only one household at a time using the fridge.”

Partnering with local restaurants, grocery stores and farms, as well as accepting donations from individuals to replenish whatever is low, Ravelli and Barrett said they are not worried that people might take advantage or abuse the situation.

“People are disadvantaged because they are under serviced. Mutual aid is offering an active service that community members are owed. And, we build a culture of trust and love around the fridge because we’re providing them with food,” Ravelli said. “A lot of times, when charities or larger organizations enter these under-resourced communities, it is viewed like, ‘Here’s a handout,’ and then they completely walk away. We are in that neighborhood. We have ties with that community, so we know the people who will be utilizing the fridge … So, I’m not worried about that at all.”

Ravelli and Barrett both agree there is a need in the community where there are people who are clearly hungry and it’s our job as community members to make sure that they are fed.

“It’s community members taking care of each other. And, I think that’s a human instinct that we all have and we need to tap into a little bit more,”Ravelli said. “Especially in time of crisis, (what) my brain automatically goes to is, ‘How can we unify?’ And, I think a fridge can do that for us.”

“The idea with this fridge is that, rather than us just providing food, we’re providing a structure in which people can care for each other. In any setting, regardless of people’s income or whether or not there’s a pandemic, that sort of structure is needed,” Barrett said. “I think people of all walks of life will use the fridge whether they are donating to it or taking food from it or both.”

The original article can be viewed here